The Aikido Club at UHM was founded by Robert Little Sensei (5th dan) and is affiliated with the Hawaii Aikido Federation. Little Sensei is the chief instructor of the club. Visitors are welcome and classes are always open to beginning students.

Please note that all the classes at Aikido Club at UHM are early morning!

The Aikido Club at UHM is located in the Physical Education/Athletic Complex Room #248, Lower Campus Road, University of Hawaii at Manoa Campus. Its mailing address is: 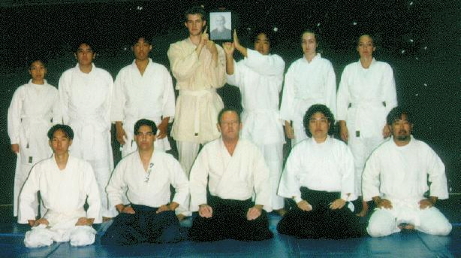 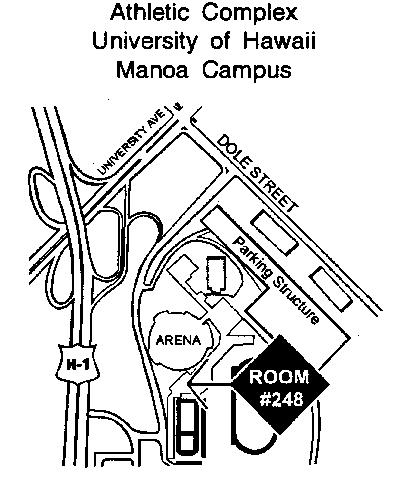 Students having a hard time focusing and disciplining themselves to study may be able to solve their problem through an aikido class.

Aikido classes, offered every Tuesday and Thursday, are actually a part of the Hawaii Aikido Federation Aikido Club meetings at the University of Hawaii.

The first lesson in discipline comes from waking up early to attend the class at 6:30 a.m.

Robert Little, UH mathematics professor and aikido class instructor, said the early hours tend to discipline students. Discipline is an important aspect of aikido. Little, who holds the rank of 4th Dan, said the UH dojo, or place of enlightenment or training, started in the fall 1989 semester under sensei (teacher) Sadao Yoshioka, 7th Dan. Little said Morihei Ueshiba, the founder of aikido, also held his classes early in the morning. Little said the course is in the morning so students can attend without having it interfere with their busy schedules.

Amber Turlik, a junior in liberal studies/pre-med, said waking up early for the class was hard at first, but she now looks forward to it. Turlik said that in aikido, participants learn how to concentrate on breathing while doing their movements. She also said the class works on joining the mind and body. Through these exercises, students get a sense of clarity and focus. She said she feels more focused at school on the days she goes to aikido class.

Jason Young, a sophomore majoring in microbiology, said he also had a hard time with the early class time but is having fun after giving it a try. There is a lot of discipline, Young said. Inside the dojo there is not much socializing, and the mood is serious, he said.

Because aikido requires discipline and hard work, Little said many of the students in the club tend to be better students. However, the martial art involves more than just learning how to focus and concentrate. Turlik said she joined the club so she could learn to defend herself. Especially being a woman, learning to protect yourself is an issue to be addressed, Turlik said. She said she does not want to carry a weapon to protect herself, and aikido was an option for her. Although Turlik said she didnt feel confident about handling herself in a situation if she were attacked, she felt that she will be more relaxed and have a better chance of escaping danger. Little said, Its a great martial art for ladies, adding that techniques in aikido are ideally suited for a womans self-defense.

Eileen Yara, an assistant instructor with a rank of 2nd Dan, said the power in aikido lies in using the oppositions energy to keep them off balance. When the techniques are learned and practiced well, the size of your opponent may not matter, she said.

Young said aikido is not aggressive, but it is harmonious. Your feel and flow with your partners energy, he said.

Because the class is small, everyone helps one another, Yara said. They are required to work together and, according to the teachings of aikido, they match their energy with their partner. Everything in our club is based on cooperation, she said.

The class this semester has less than 10 students. According to Little, each student may have different ranks, but everyone practices together. Its really not much of a problem, he said. A typical class starts off with stretching exercises and flows into working with one or two techniques. These are done slowly and tailored to beginners, Little said. Little said the more advanced student performs the same exercises as the beginner, but is stronger and performs the moves better. Experienced students may also get work with the wooden sword, wooden knife and a staff, he said. Aikido takes much practice, he said, but no one is forced to do something they dont want to do. However, this doesnt mean students should not go to class. Little said, Consistency is very important if you're going to make any progress.